February 12, 2018 - Procor's Field Services Business Unit has established an On-Site rail car repair location at the Transmark Ltd. rail car storage facility just outside of Lethbridge, AB. Transmark is located in the heart of Southern Alberta, just 10 minutes from Lethbridge off the Canadian Pacific mainline and 50 miles from Sweetgrass, Montana at the interchange with BNSF. Transmark can accommodate full unit trains and has storage capacity for up to 1000 rail cars.

October 5, 2017 - Bill C-49, known as the "Transportation Modernization Act", received second reading and was referred to Committee on June 19. The Standing Committee on Transport, Infrastructure and Communities (TRAN) has considered the Bill and has agreed to report it with amendments which can be found here.

September 30, 2015 - Marmon Holdings, Inc. has reached a definitive agreement with General Electric Capital Corporation and, as of September 30, 2015, has acquired substantially all of GE Railcar Services’ owned fleet of railroad tank cars.

The acquired railcar assets will become part of the portfolio of rail equipment managed by Marmon's Union Tank Car Company and Procor Limited.

Transportation of Flammable Liquids By Rail

The enhanced tank car standards are an amendment to Canada’s Transportation of Dangerous Goods rules for Class 3 flammable liquids, which became effective when published in Canada Gazette II on May 20, 2015. In the U.S., the final rule (HM-251) is set to become effective July 7, 2015.

February 6, 2015 - The Railway Supply Institute Committee on tank cars (RSI-CTC) has issued a statement regarding the proposed rule going to the Office of Management and Budget for review. Click here to access the full document.

September 22, 2014 - We are pleased to announce our newest mobile repair unit, based in Regina. The unit is fully operational, servicing southern and central Saskatchewan. Click here to learn more about our on-site repair capabilities and to access contact information.

April 23, 2014 - The Honourable Lisa Raitt, Minister of Transport, today announced decisive actions to address the Transportation Safety Board of Canada’s initial recommendations regarding the ongoing investigation into the Lac-Mégantic train derailment. More ...

October 17, 2013 - Protective Direction No. 31, pertains to classification testing of crude oil being imported, handled, offered for transport or transported as UN 1267 or UN 1993, and to provide those results to Transport Canada upon request. This Directive was effective immediately.
More ...

August 30, 2013 - In July, Lisa Raitt was appointed Minister of Transport. She had previously served as Minister of Natural Resources and Minister of Labour.
More ...

August 27, 2013 - Since 1994, containers returning to the United States with only product residues have been allowed to enter as empty for Customs purposes.
More ...

In addition to Procor's cross-functional team support, and local engineering and technical resources, the following publications are available to our leasing customers:

On track! is a quarterly news publication from Procor Limited to keep our customers apprised of rail car and rail industry developments.

Our periodic AAR, Regulatory and Industry Development document is a compilation of recent and ongoing issues affecting rail car use and design. 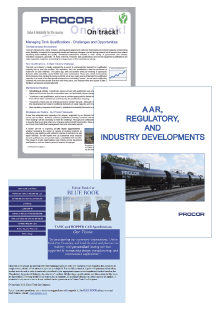